As I type this, I am singing Taylor Swifts, “Welcome to New York” over and over in my head!!

If you follow me on social media, you probably saw that Harry and I took a trip to the big apple with his parents and his sister!

Harry & I have always wanted to go to New York at Christmas time because we got married at Christmas and it’s just the most magical time of year! Psst.. I had also NEVER been to NY before so what better way to experience it, than at Christmas time! 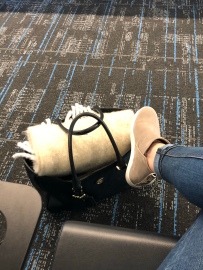 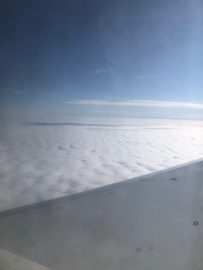 We traveled during the first week of Decemeber! We were gone Wednesday- Sunday!

As soon as our plane landed in New York that morning, we dropped our stuff off at the hotel, then we were off to explore. Our hotel was called, The Benjamin! I loved how central it was to everything! We were able to leave the hotel and walk just about anywhere! When in New York City, you WALK, WALK, WALK!! 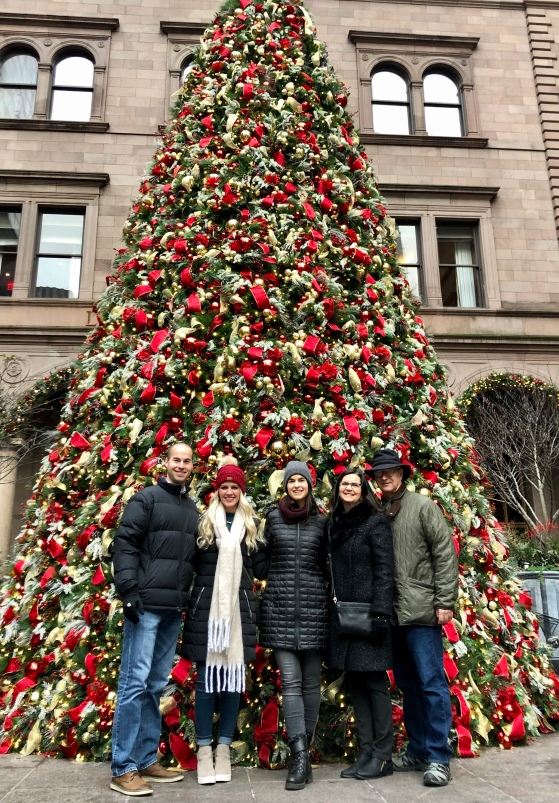 The first thing we came across was this beautiful tree! It’s a lot easier to get a picture in front of this tree vs. the tree at Rockefeller center! Give me all the Christmas trees!!

Next up, we explored Central Park! This was a highlight of the trip for me! Central Park is so pretty and look at that skyline!

We stopped at Sarabeth’s for lunch! This was one of my favorite restuarants we tried!! I had an adult grilled cheese with tomato soup. It was AMAZING!! Perfect for cold NY weather! 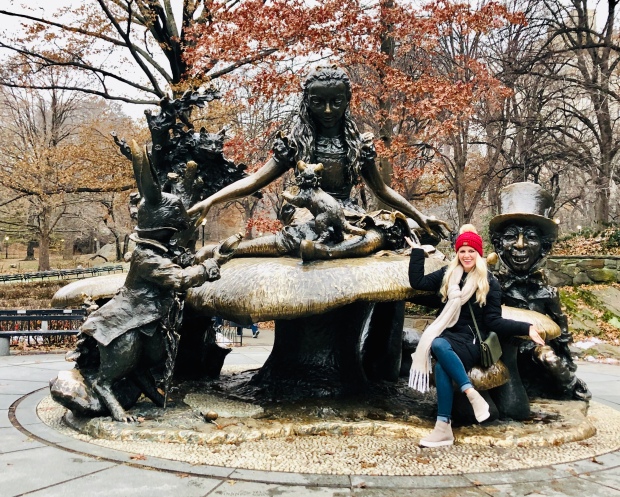 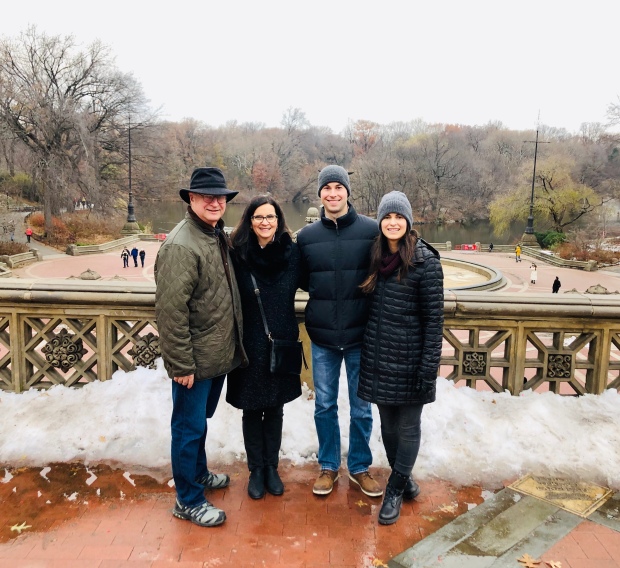 After lunch, we did some more walking and sight seeing! 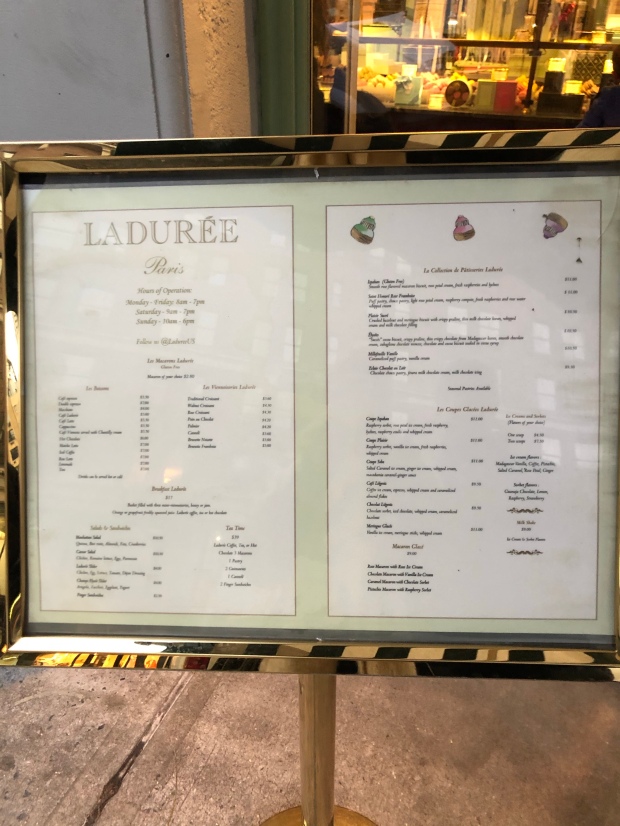 We stopped by this cute little place called Laduree to get some macaroons! Y’all.. they tasted like heaven!

We freshened up at the hotel, then headed out for dinner at LeRivage! I had a bowl of french onion soup as an appetizer and chicken for dinner. This is the only photo I took at dinner but everything was SO good! This restaurant made me feel like I was in a cute little Christmas cottage because it was small and quaint with Christmas lights strung around!

We ended day 1 in New York by seeing the broadway show, Hamilton!! What a way to end day 1! This was my first broadway show and it was just amazing! 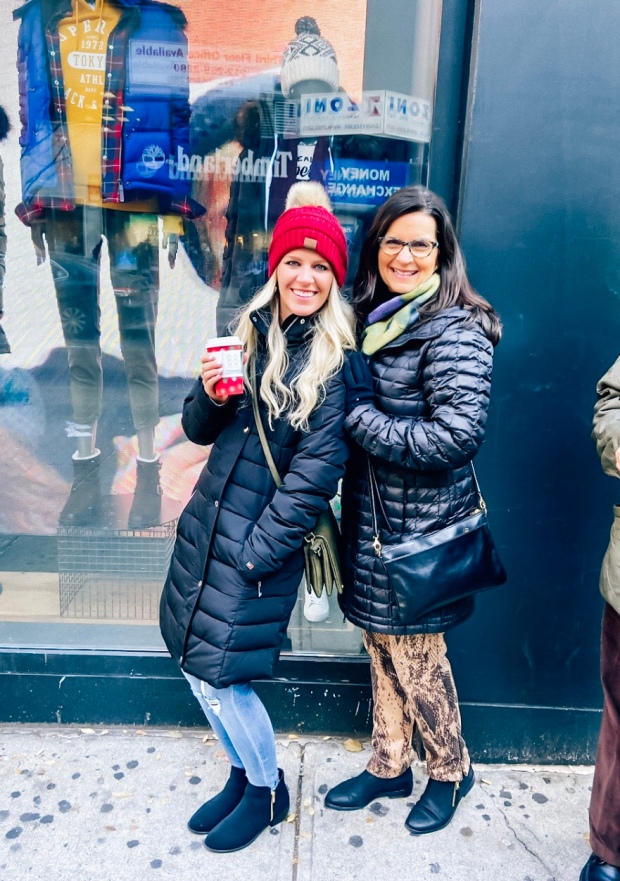 Day two!! Coffee was a must! We had breakfast at a bagel shop and I had a plain bagel with cream cheese and oh my word! It was so yummy. I wish I had taken a picture though. You wouldn’t believe the amount of cream cheese they put on a bagel in NY! LOL 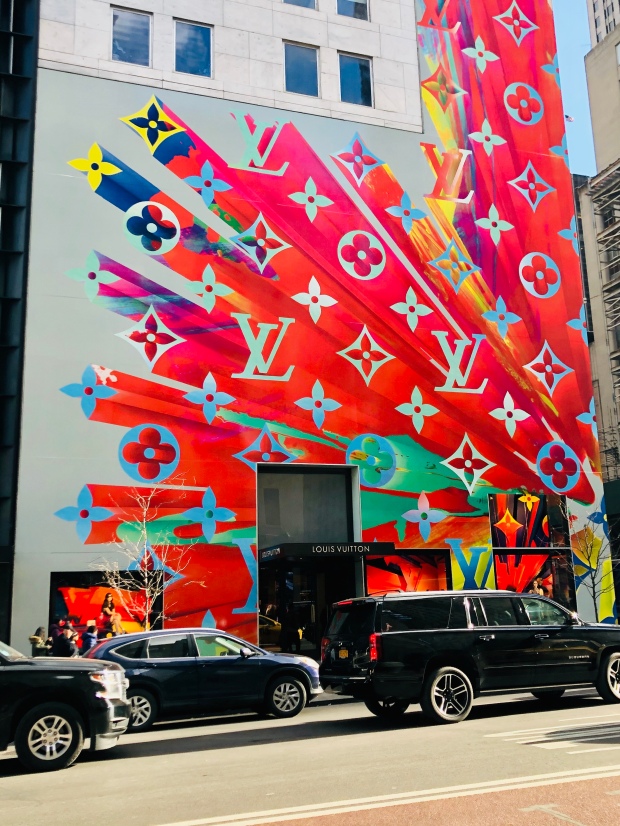 We did some sight seeing!

We stopped to take in the scenery!!

We walked through a place called Chelsea’s Market! It was so cute and festive! 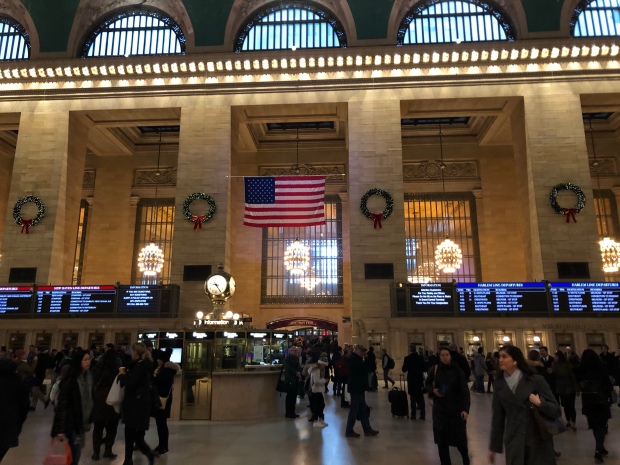 We walked through the train station!

When in New York… pizza is a must! We found good pizza at Artichoke Basille’s Pizza. It was so YUMMY! That night, we had dinner at a mexican place called Toloache! Not the best quality photo but this was the BEST quesadilla I’ve ever had!! 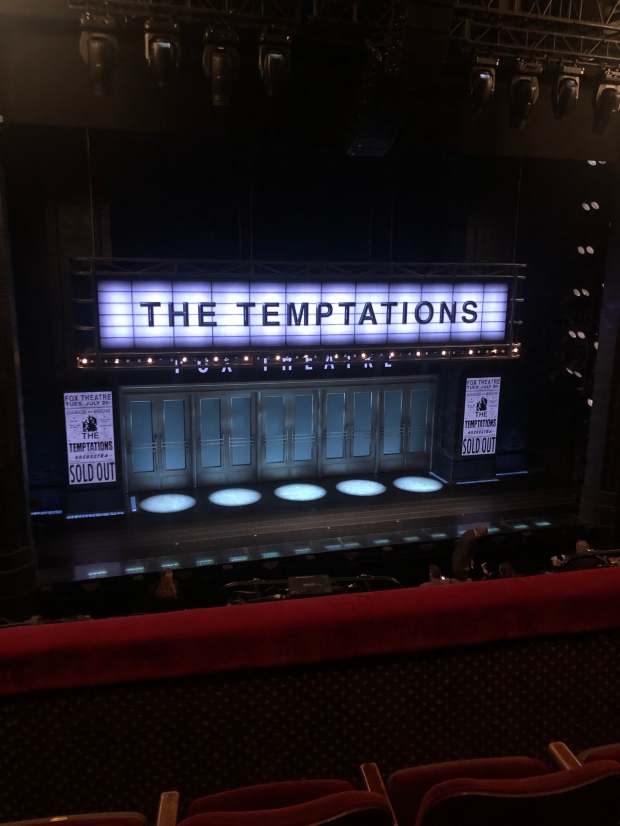 After dinner, we headed to see The Temptations! It was a lot of jukebox type music and it was just FUN! The show also had a good story to go with it!

It was only fitting that we visited a place called Star Dust Diner after the show! All of the servers sing at this diner so it kept the fun going throughout the night! Oh, and they have the BEST milkshakes!! 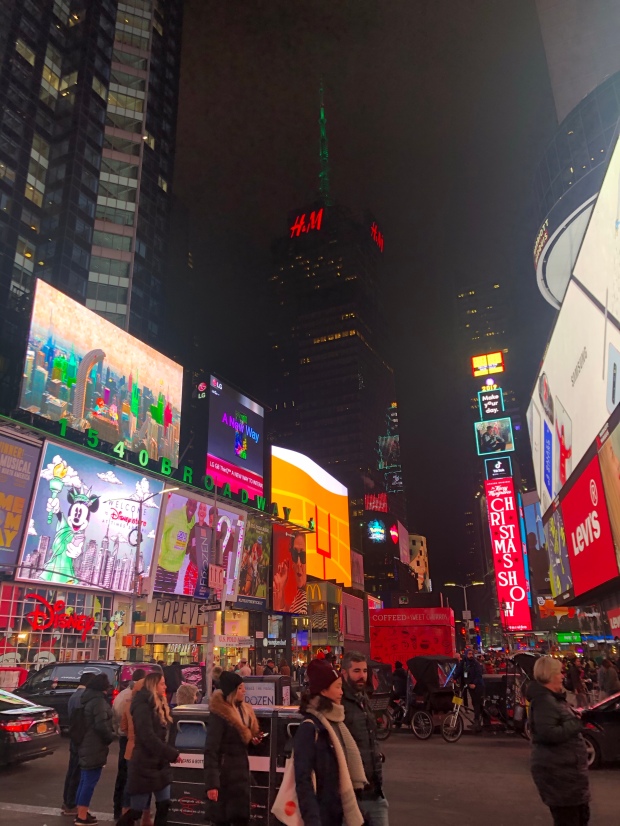 We also did a little walk through Time Square on the way back to the hotel!

We also passed by Radio City!

Day 3!! Friday morning, we had breakfast at another bagel shop! This time I did a bacon, egg, and cheese bagel! It was perfection! 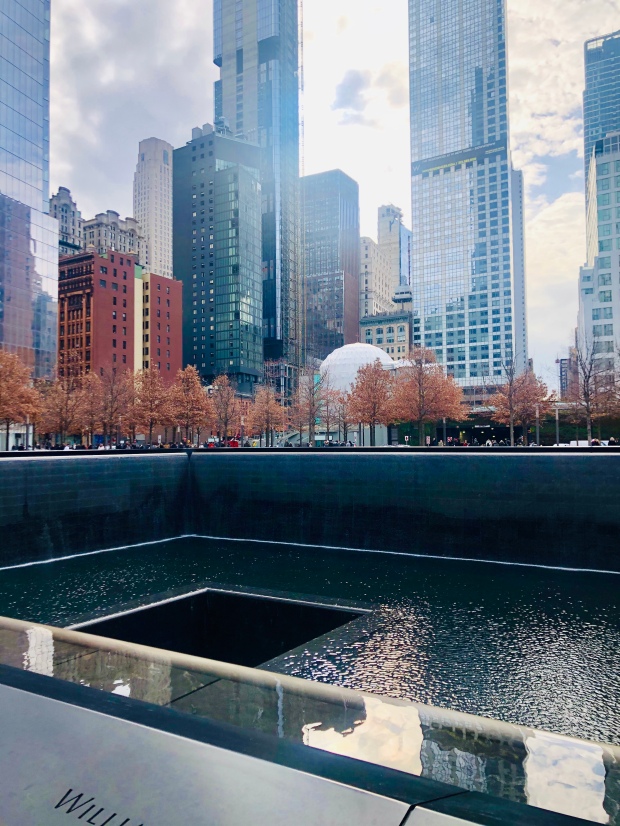 Next, we went to visit the 9/ 11 museum! There are memorial fountains outside of the museum to represent where the twin towers stood. It left me speechless to stand in front of this memorial.

Visiting the museum also left me speechless. I can think back to exactly where I was on that day, as I’m sure you can too. It gives me chills.

After the museum, we had lunch at a sandwich shop. Then, Harry & I headed off to do shop/ explore the city some more!

Like I said earlier, we did  A LOT of walking on this trip which I enjoyed. New York is big but you can easily walk from Rockefeller center, to Time Square, to Central Park, etc. Driving takes too long because of traffic!! If we were going longer distances, we would take a taxi like the above picture but for the most part, we walked!

When in New York.. you have to go to Bergdorf’s… to window shop and just browse! LOL.. because let’s be real.. a headband is a hundred dollars! We had fun looking around though!

We also stopped by Trump tower!! It was so pretty and decorated for Christmas inside!

The Plaza Hotel!! We passed by this hotel so many times and every time I would think about Home Alone and look around for Kevin! LOL 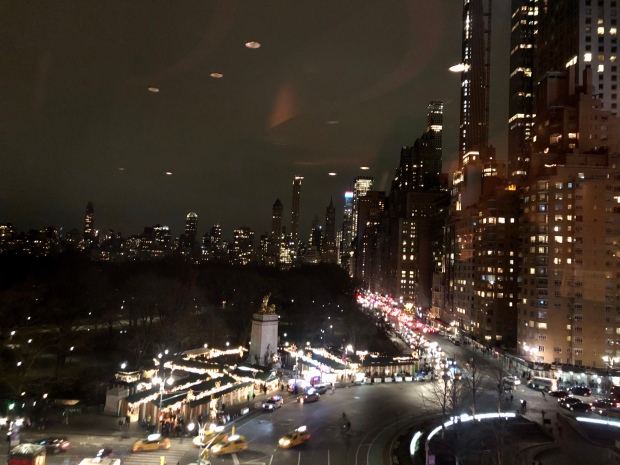 After exploring the city some more, we headed back to the hotel to freshen up for the night! We went to a place called Dizzy’s for drinks and appetizers! Look at the view from this place! There was also a jazz band playing, Dizzy’s was another highlight for me!

We went to dinner at Boqueria where we met Rose’s friend Sophie who lives in NY! Boqueria is a tapas place and I seriously thought the food would never end. It was the perfect way to try a little bit of everything and it was SO good! One of my favorite things here was the shrimp! YUM! (We were so caught up in the moment, I failed to take a photo at dinner.)

Day 4!! Harry and I woke up early and took a ferry out to see the Statue of Liberty. The statue is HUGE!! It makes you feel so small standing in front of it!

A lot of people have asked how the weather was while we were in New York. It was cold but not unbearable. If you bundle up with a good jacket, you’re fine!! The only time we were freezing, was at Liberty Island to see the Statue of Liberty. We were so close to the water so it made everything colder.

We’ll bear the wind and cold anyday for this view! 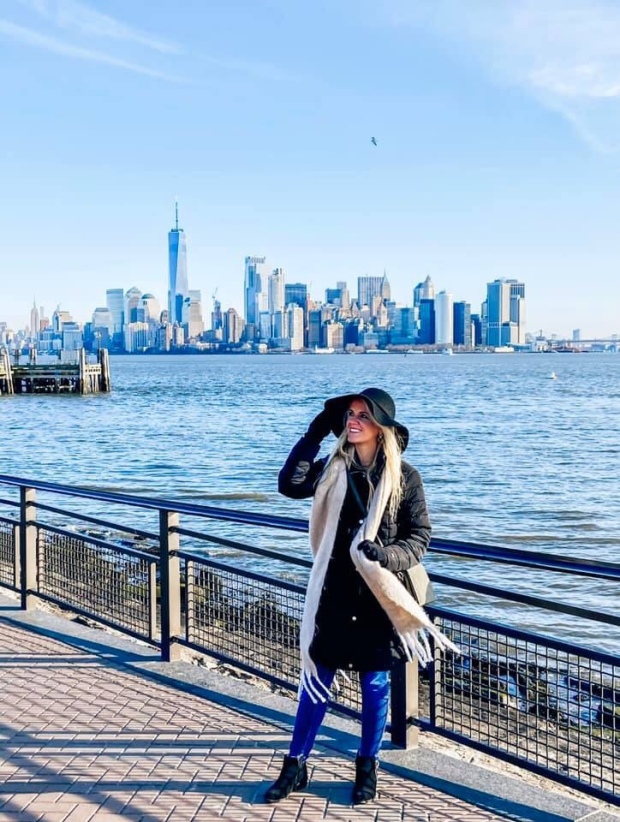 The sky’s the limit.

We skipped breakfast on day 4 so after we got off the ferry from seeing Statue of Liberty, we took a taxi to Rockefeller Center to get lunch at Cucina and Co. Not the best quality photo but we both loved it! Give us all the pasta!! 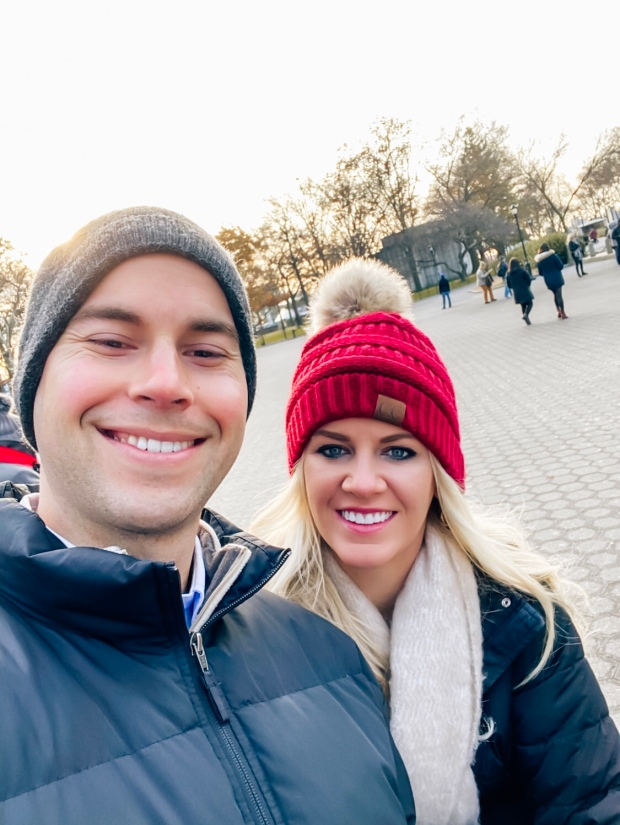 After lunch, we did some more shopping and walking around! We were walking about 8-9 miles each day! It literally felt amazing.

And since we’re doing so much walking.. we’re allowed to eat cheesecake right?! I mean.. when in New york..! #sodelicious 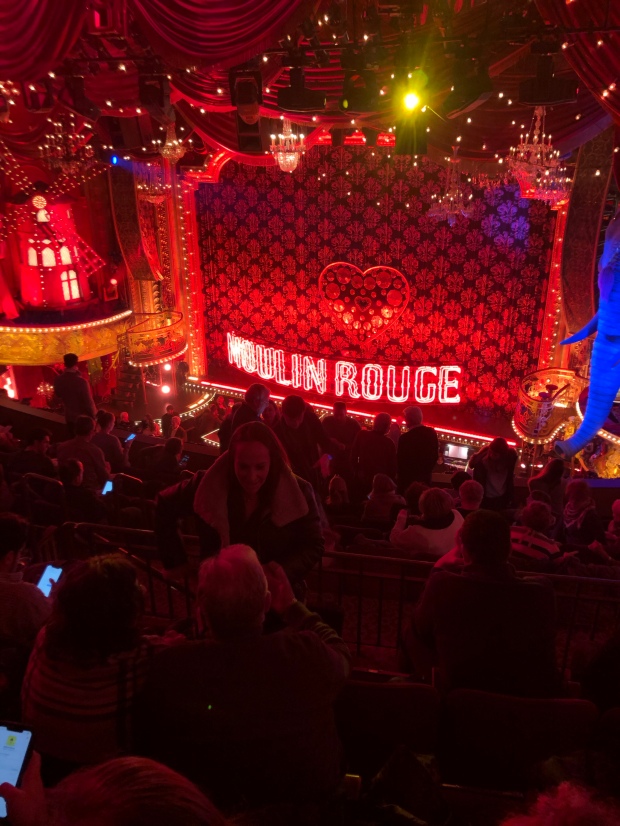 That afternoon, we met up with Harry’s parents to see Moulin Rouge! This was my FAVORITE broadway show!! It was a romance but SO FUN. There was so much energy in the room! I highly recommend this broadway show if you visit NY!! 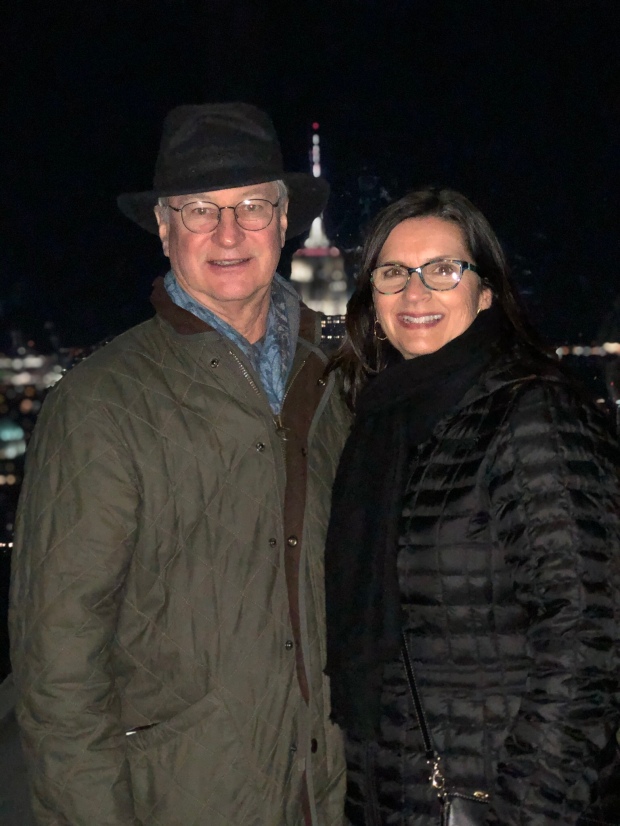 After the show, it was dark and we went to Top of the Rock!

This is the pefect way to see a view of the city! This really made me feel like there is nothing like New York! It’s just amazing! 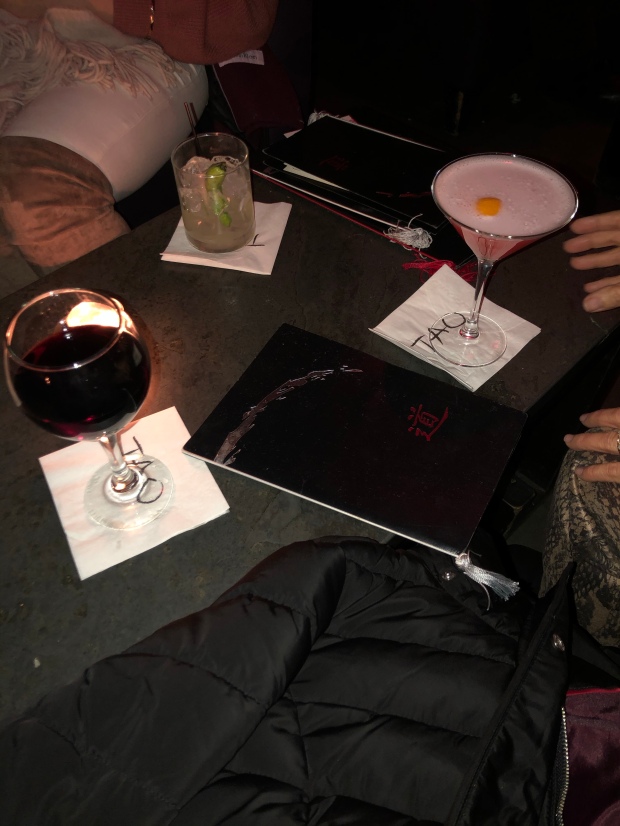 Then, it was time for dinner! Harry’s brother use to live in New York and he recommended Tao for dinner. It’s an Asian restaurant and the food was amazing! I failed to get a photo of the food but I did get a photo of our drinks while we waited! 🙂 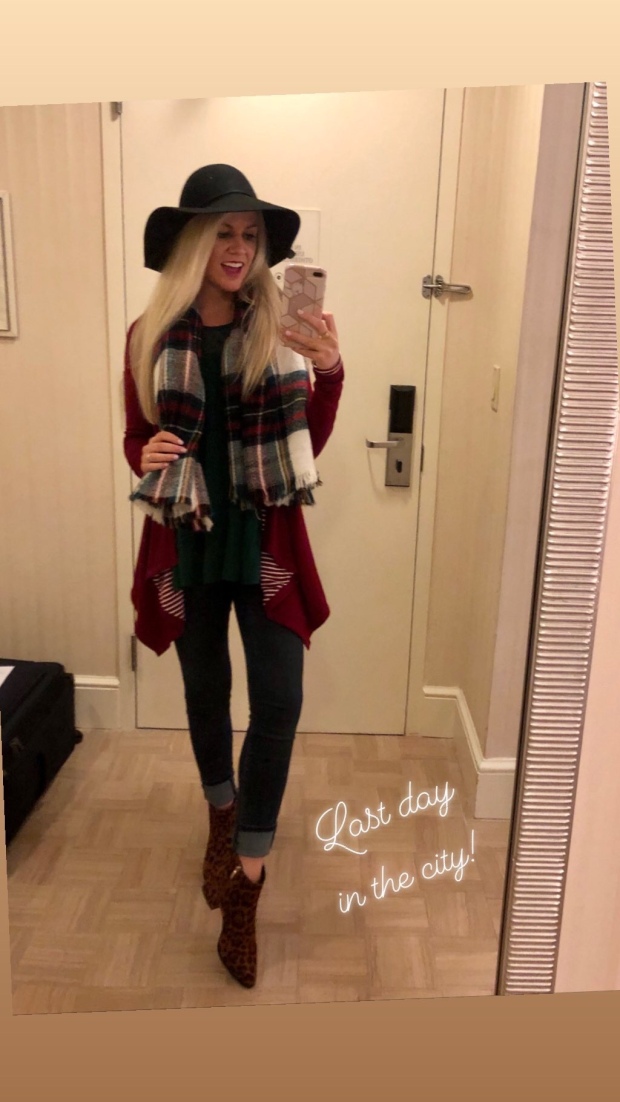 We were up early to enjoy our last day in the city!!

Harry and I went to Radio City to see Christmas Spectacular with the rockettes!

It put me in a such a magical Christmas spirit. I know it sounds cheesey.. but really, it was magical. There were so many kids there to see Santa and the rockettes!

Radio City was the perfect way to end the trip! After the performance, we walked to get lunch at Pio Pio. It was a family style restauarnt where we ordered rotisserie chicken and sides for the table! So good!!

Last, it was time to head home!

I’ve been pinching myself ever since I got home. Like I said earlier, there is no place like New York!

For that to have been my first time in New York, we were able to see and do a lot to get the full NYC experience!! I can’t wait to go back someday!

I hope this blog post gave you some ideas of things to do and places to eat if you visit the city! I have to give MAJOR credit to Harry’s mom for planning our itinerary. She has traveled to New York numerous times so she knew just what to put on the agenda for first timers like me!

I’m going to link a few of the items I took with me to New York and if you have ANY questions, please ask!

I debated taking this hat to NY and I’m so glad I did! I loveee it!

I wore these shoes a lot in NY! I wanted a good pair of walking shoes and these were great!

This coat is similar to my coat. It kept me SO warm in the big apple!!

This blog post was super long and if you made it all the way through, bless you!

From my family to yours, we wish you a very Merry Christmas!

We hope your Christmas is filled with lots of love, joy, and family!!

“And she shall bring forth a son, and thou shalt call his name Jesus: for he shall save his people from their sins.” Matthew 1:21

3 thoughts on “Welcome to New York!”